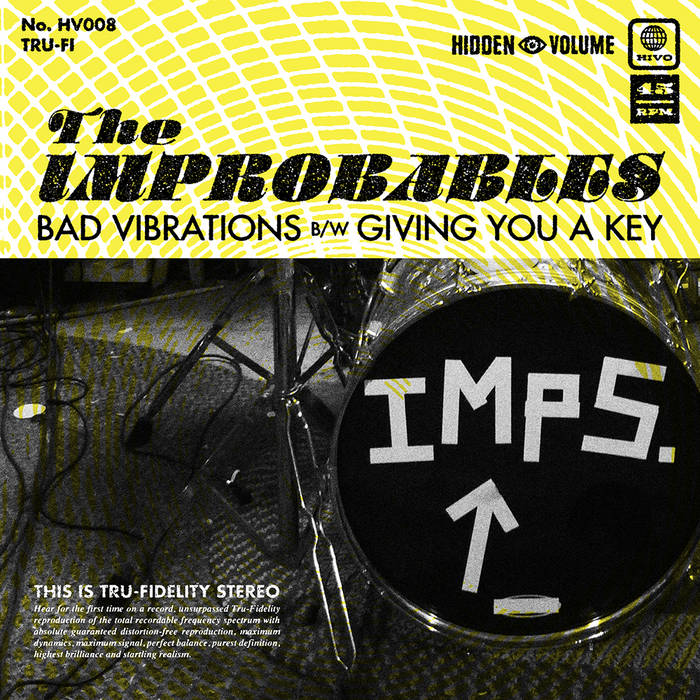 Bart Furp Two much, baby! No favorite here, this is definitely a double A-side single.

Joe Timmons The mastery of the Garage Punk Sound of my youth here, no questions about it, well worth every penny you could and should Pay. Cant wait to hear more! Favorite track: Bad Vibrations.

"Had not heard of the label before but with this release and others, seems like it’ll be a force to be reckoned with. Anywho, these two songs would be requested over and over again if this trio played your next frat party. Or house party. Or whatever. Vocalist/bassist Dave makes all the girls swoon (but drummer Jeremy gets ’em in the door in the first place). I/we need a full-length from this band. Terrific stuff and yes, boo boo blue vinyl."

Two songs from this Philly-based bunch (on a fairly new label that’s releasing a ton of cool singles) and I, for one, hope to hear a full-length soon. The two songs in question have the three things you need: hooks, power and energy. “Bad Vibrations” kicks it into high gear from the get go (with a liberal use of tambourine) while the flip, “Giving You the Key” has some wild guitar playing (straight outta 1966!) and was a real treat as well. It’s got a big hole, is ready for your jukebox and the blue vinyl is a plus as well. You can’t lose.

From Inkinstereo.com
"I think Hidden Volume Records is quickly becoming my favorite label because it seems what ever they release is gold. The Improbables new 45 single “Bad Vibrations/Giving you a Key” is no exception to this golden rule. I’m enjoying every aspect about this release; from the artwork to the sound. Let’s start there, shall we?

Damn good. Like the mid years of garage punk rock came right around and smacked these guys in the face and told them to play it right, and they do. “Bad Vibrations” just sets the tone right from the beginning with the thick kick drum, tambourine, the slight Elvis-ish (Elvish?) vibrato and other such vocal inflections. They pick it right up in the second verse with Beatles like harmonies and rocking vocals. They jump right to a blues infected intro riff to “Give you a Key” and again, vibrato on the vox, which is great by the way. The guitar hook re-vist in the chorus is a nice throwback to the beginning of rock-n-roll music; the screaming, drawn out notes in the solo, nothing fancy or flashy here folks save the attitude. By the way, that attitude? Yeah, that attitude is rock-n-roll baby, dig it."

From Kick Out The Jams Blog:
oscarkotj.blogspot.com
[Horribly translated by Google]

"The NY give way to The Unlikely to lash base from Pennsylvania fantastic beat. The trio starts with “Bad Vibrations” … there is Dave finishing spray the spleen harmless little left between my guts attacked with low diabolical stuck in a role tailor-made guitars Kevin seconded creating melodies with magnificent choirs a subject full of echoes of the Beatles and the Who. And again a healthy envy rots me to discover new bands on the label, in the face b guitars shelled classic rock and roll with a nod to Johnny Kid and Link Wray at the “Giving you a key,” another album that I fear pasture seekers will be seven inches and I can not resist returning to pinchármelo vein."

All songs by The Improbables