Get fresh music recommendations delivered to your inbox every Friday.

Running Out of Time 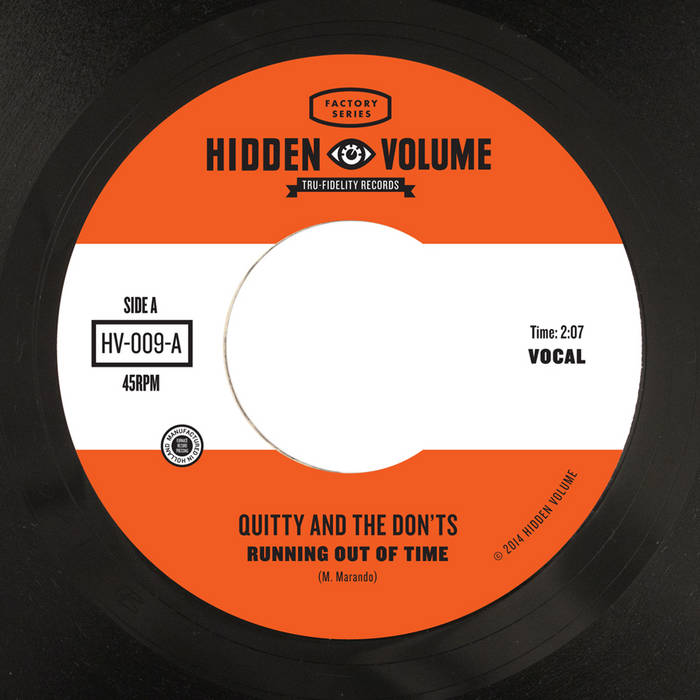 From Bananas Mag No. 9

"This is a local New York group that I haven't seen in years. They've had almost a total lineup change since then so I'm really rediscovering them through this 7" even though some of them live less than a couple of miles from me! The A-Side has a pretty classic 60s garage rock sound with solid guitar leads. The flip is a moodier mid 60s track with interesting guitar parts. It feels really '65/66. Interested to see what this bunch does next!" ---Shimmy

"Running Out of Time”, Quitty & The Don’ts new single, sounds like a long lost British Invasion nugget that could be hidden deep in your favorite English Pub’s jukebox, stuck in there somewhere between The Yardbirds and that early Rolling Stones B-side you forgot you loved so much. Quitty & The Don’ts pull from some pretty strong ‘60’s Union Jack-waving influences while carving out their own decidedly mod identity: take a break from polishing up the chrome on your vintage Lambretta and grab one of the first 150 copies on red wax..."

From Kick Out The Jams Blog:
oscarkotj.blogspot.com
[Horribly translated by Google]

"The last four references of this label just arrived in my garage and are already turning on my record player, starting Quitty and the Don’ts, band coming from NY and colleague of other favorite bands of this blog like Electric Mess and Above . This is her second single, the first was a super limited edition that I fear will never end in my hands, is part of the Factory Series collection where already left a single Kaics the Ar recommended. Side A begins with “Running out of time” where Matt Clarke (Above) hits you in the pit of my stomach doing the four strings of his bass vibrate, the sounds of the Kinks and the Hollies come together in a theme loaded bright guitars and tambourines nerve. The B side contains another issue to worship this band, if you love Nerve Optic or Nashville Rambles you’ll go crazy for this group when you hear “(She’s Gonna) Break your heart” pure 60s sound in the XXI century, just over four minutes of pop magic in all its glory."

Engineered and Mixed by Matt Clarke

Engineered and Mixed by Matt Clarke

Produced by Quitty and the Don'ts