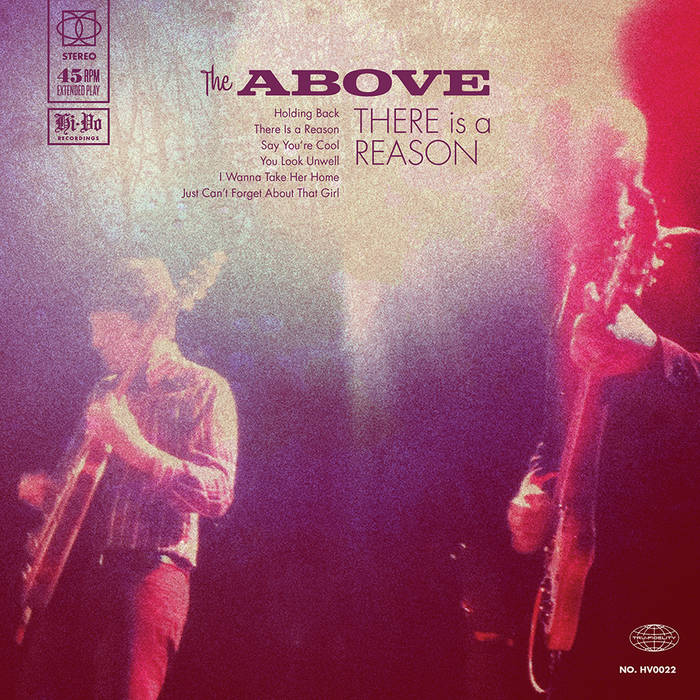 For DIGITAL ONLY (and streaming) please visit: theabove.bandcamp.com/album/there-is-a-reason


Brooklyn quartet, The Above deliver “There Is a Reason” their Hi-Vo debut 10” EP. Six gorgeous tunes ranging from Byrds/Kinks-inspired garage rock to Baroque Pop that brings to mind The Zombies or Left Banke. Chiming 12-strings, propulsive bass lines, Wilsonesque harmonies, mellotron(!), and more make this their best work to date.

SHINDIG #57 (UK) FIVE STARS
"The brand new, hot off the press six-track 10-inch stereo 45rpm EP direct from the hearts and minds of New York-based combo The Above. A triumph in sound and composition, the production is loud, crisp and lush, yet still retains a feel that is raw, appealing and sonically alive. Full of character and charm, each cut is brimful with great lead and background vocals and deep, zoned-in electro-acoustics – including the deployment of Mellotron, piano and the multi-hued dynamics of multi-layered sparkling guitar maneuvers. The infectious nature, and irresistible harmony highs held within such as the title track and 'I Wanna Take Her Home' (a contender for powerpop beat nugget of the year so far) are utterly breathtaking; redolent of moves being made by The Byrds and The Zombies in their heyday but oozing modernity and NYC cool. It comes resplendent in as thick an outer jacket as any record lover could hope to find today. Grab it now before it’s gone."

Shindig #56
SHINDIGGIN’ TOP 10 May 2016
“Hot of the press six-track 10-inch EP from New York’s The Above is a triumph of both sound and composition. Loud, crisp and lush, yet raw and sonically alive, its charm is utterly infectious. The harmony highs held within the title track and “I Wanna Take Her Home” (contender for powerpop/beat nugget of the year so far) recall The Beatles, Byrds and Zombies and the whole thing is presented in as thick a jacket as one could hope to find."

Bananas #13
"Here we have a brand new 10” 45 outing from this undeniably cool, multi-talented [band] with more than just a mild fixation for the mid-60s. They originate from outta New York and are led by David Alan Horowitz one of the two guitarists and three vocalists the group has. You remember their album “Waterbury Street" from a year or two back on Italy’s Teen Sound label, it was loaded with prime garage-pop jangle.

The thing about this record, a six-track EP no less, is that aside from a change of drummer, nearly all cuts are as temperature-runningly infectious as each other, crammed full of tight melodies and some appealingly edgy instrumentation, all of which lifts the group high above the average mod-attired combo of the day.

Especially worthy of your attention and hard-earned pennies are [guitarist] Matt Marando’s sublime title track ‘There Is a Reason’, and Horowitz’s ‘I Wanna Take Her Home’—a pure power pop pearl no question! Some of this takes you right back to The Byrds and The Zombies source with that detailed production ethic and sonic intuition where the guitars, vocals, drums and organ; mellotron too, occupy a space in the mix that let’s everything shine out without other components feeling that they’re being squeezed out. A triumph in sound and composition. Dig the superb thicker than thick card cover too. Get it now!" –Lenny Helsing


Joe Belock, WFMU (Three Chord Monte)
wfmu.org
"The Brooklyn beat masters are back with their most varied set to date, ‘There Is a Reason,’ a six-pack sampler of all the fab sounds that have made them a cut above other ‘60s-inspired rock and roll enthusiasts. The influences that have fueled The Above over the course of two LPs and a quality clutch of singles are present front and center: British freakbeat, R&B, garage, vocal harmonies. But there is another reason why you need this record - the songs. They are instantly familiar, yet performed with the energy and flair to make them 21st-century fresh and exciting."

50thirdand3rd.com:
"From the opening track “Holding Back” it’s quite apparent that The Above are staking their claim to being one of the coolest bands of 2016. When you play The Above you hear the history of the British Invasion. “I Wanna Take Her Home” will have you shaking your head in total excitement “I Just Can’t Forget About That Girl” will convince you that you are hearing something from an American band that hasn’t been accomplished since the days of The Rascals [or] early Byrds. The title Track “There is a Reason”—I’m picking up a little Steve Winwood around the time of Traffic and that’s about as impressed as I’ve been in the 3 years we have been reviewing and talking to bands. “You Look Unwell” closes out this excellent EP, with a rocking tune leaving you with one undeniable fact…The Above are able to assimilate some of the greats that have come before into a sound that is uniquely their own."

Produced by The Above